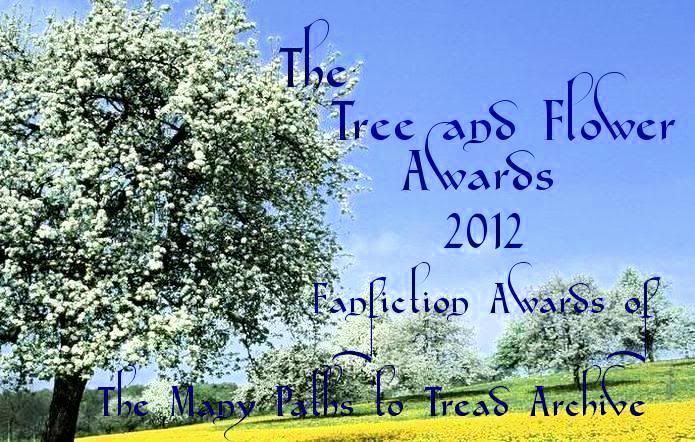 In celebration of our Third Anniversary, we are pleased to announce the very first Many Paths to Tread "Tree and Flower" Awards!

Here are the rules:

1. Only stories posted at the Many Paths to Tread Archive are eligible.
2. Stories must be posted at the MPTT Archive by August 3 of this year to be eligible. All stories posted to the site prior to that date are eligible.
3. No self nominations.
4. Nominations will be made to screened posts at the LiveJournal Community. (If you have trouble accessing LiveJournal, you may email the mods at: aelfwina@gmail.com, virginia_lee_redcat@yahoo.com, or celeritassagittae@gmail.com. to make nominations for you.)
5. Stories may run in only one category; if the story is nominated in two or more categories the author may choose where to run it. Nominators may nominate one story per category, but may make nominations in as many categories as they wish.
6. Nominators are permitted to promote the stories they have nominated, though they cannot ask people to vote for any particular one.
7. Nominations will open on August 10, and will run through August 24.
8. The first round of voting will begin on August 27, and will continue to September 14. Votes may be cast in a poll at the LiveJournal Community or in a poll at the LOTR_GFIC_Community Yahoo!Group. Voters are asked to vote at only ONE of the polls.
9. The winners in each category will run in a second round of polls to select the top four winners overall. Voting for that round will begin on September 17, and run through September 20. Overall winners will be announced on September 22.
10. Places will be first, second, third and Honorable Mention in each category, and in the overall round.

This is a simple old-fashioned "ticky-box" awards, but we hope everyone will enjoy participating in it! Come and help us celebrate our Third Anniversary!

The Many Paths to Tread Archive is three years old! To celebrate this milestone, we are posting stories from a very special challenge!

We announced a Special Third Anniversary Challenge, for stories inspired by the poem in The Fellowship of the Ring, Chapter III, "Three's Company, that begins "Upon the Hearth the Fire is Red", and includes the words that inspired the name of the archive: "...and there are many paths to tread".

This challenge was for both stories and art, and we had several authors and artists participating!

Standing Stones by Dreamflower Bilbo and young Frodo come across an astonishing sight in the Northfarthing.
Art: Towards the Moon or to the Sun by Oshun Icons, Photoshopping
“In Ships Made of Dreams” by Shirebound In the West, Frodo and Bilbo are encouraged to try something new.
The World Ahead by Linaewen Boromir must decide which road to take in his journey to Rivendell.
"Mirror of World and Time" by Ellynn Ithilwen Galadriel finds one very special place in her new homeland.
Art: Many Paths to Tread by Linda Hoyland Slide show, photography
Art: Standing Stone by Linda HoylandPhotography
Fare you well - Linda Hoyland Aragorn bids farewell to his Hobbit friends.
Hidden Paths by Linda Hoyland Aragorn’s thoughts as the Fellowship prepare to depart on their quest.
Shadows by Linda Hoyland Faramir is imprisoned in a realm of shadows
New Roads and Secret Gates - by Larner Faramir has the chance to learn more about the Hobbits and his brother's interactions with them as a member of the Fellowship of the Ring.
Walking Away-- Lothuial's Tale by Erulisse (one L) Lothuial, a Speaker of the People, is finally leaving her home in the Greenwood to join others, head to the Havens, and finally pass over the Sundering Sea to the West.
ETAPreservation by songspinner9 Merry and Pippin go foraging in the summer with a purpose...set about two years after their return to the Shire.

We'd like to thank all of the authors and artists who participated! Thank you for taking part in this birthday celebration, and allowing us to give the gift of stories and art to others.

Please drop in and read the stories or look at the art, and take a moment to thank the givers! We hope everyone enjoys them!

Authors, if you can, please upload your stories or art to the archive in the next few days! If you do that, it saves us a lot of work.