Five years ago today, the Many Paths to Tread Archive was opened. Founding mods were

labourslamp AKA Celeritas also was a mod. Later

rhapsody11 became one of our co-mods as well.

Cathleen, Pearl and Celeritas are currently on hiatus as co-mods, but we hope that one day real life will allow them to join us again.

To celebrate, we set up a special Comment Fic Challenge. which was to be unveiled today, but the stories are not yet complete, so we will be extending the challenge for another ten days! If you have not yet taken the chance to contribute, go have a look and maybe join in! We are also extending the Art Challenge for the same amount of time. We as yet have no entries there, but hope some of you might feel inspired to contribute!

Thank you all for the support you have given the archive over the years! 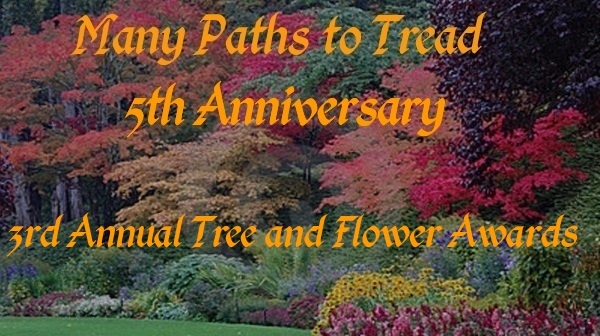 In celebration of our Fifth Anniversary, we are pleased to announce the third Many Paths to Tread "Tree and Flower" Awards!

Here are the rules:

1. Only stories posted at the Many Paths to Tread Archive are eligible.

2. Stories or art must have been posted at the MPTT Archive by July 26 of this year to be eligible. All stories posted to the site prior to that date are eligible. Stories may be updated after that, but the story must have gone up at the archive on or before that date.

3. No stories or art which won an award in the previous year are eligible for a second nomination, except a story which was nominated in the Work-in-Progress category in a previous year may be nominated in a different category when it is completed. Lists of previous winners will be posted for nominators to check prior to making nominations.

5. Nominations will be made to posts at the LiveJournal Community. (If you have trouble accessing LiveJournal, you may email the mods at: manypaths@lotrgfic.com to make nominations for you.)

7. Nominators are permitted to promote the stories they have nominated, though they cannot ask people to vote for any particular one.

8. Nominations will open on July 29 and will run through August 15.

9. The first round of voting will begin on August 29, and will continue to September 15. Votes will be cast in a poll, the link to which will be announced at both this community and at the Yahoo! email group on September 28.

10. Places will be first, second, third and Honorable Mention in each category.

This is a simple old-fashioned "ticky-box" awards, but we hope everyone will enjoy participating in it! Come and help us celebrate our Fifth Anniversary!