Welcome to the 2016 January Potluck Challenge. For those of you who are new to this challenge, it's where we (1) give you a chance to finish up and post any challenges you did not finish during 2015, or (2) give you a chance at some of the prompts that did not get used during the past year or (3) both.

This year we are trying something new. Instead of striking out the prompts as people use them, simply choose your prompt and claim it, but we will leave it for others to claim as well. In addition, you are not limited to just one prompt. You may claim as many as you like; we do ask that you put each claim in a separate comment, as it will help us keep track of things better. If you want to, you may claim a prompt, finish it and then claim another. You may also comment to say if you are finishing up a story from previous challenges.

In addition, we are adding the Yule Fic Exchange prompts this year to give you even more to choose from!

Your stories will be due in the moderator's queue by Friday, January 22, and will be unlocked on Monday, January 25. Please tag your story "month: 2016 January" and "challenge: potluck" Please remember to use the following header template (also found on the community profile page), and to put the name of your story and your name in the subject line.

Prompts are behind the cut:
( Collapse ) 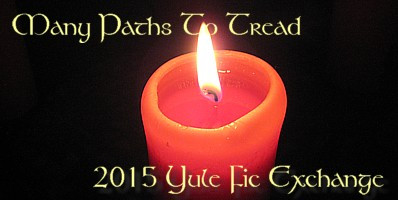 The 2015 LOTR Yule Fic Exchange stories, have been posted, except for one, which will soon be posted. We hope that everyone has had a chance to read and enjoy their stories, and have thanked their author!

"Coming Home" by Ysilme (for Shirebound) After the loss of his beloved Rosie, Sam Gamgee travels West, unsure what might await him. Does Mr. Frodo still live? Will anybody even remember him?
"Song of the Stone" by Dawn Felagund (for Zdenka) Newly arrived at Khazad-dûm in the Second Age, the Elven loremaster Pengolodh presents a portion of his new book to Narvi only to discover that his understanding of the “great profit” that existed between the Dwarves of Belegost and the people of Caranthir in the First Age is not quite what he assumed.
Despair and Defiance, by Zdenka for Enochia Celebrimbor comes to Galadriel with word of Annatar’s betrayal, and offers her a gift.
A New Start by Scribe_of_Mirrormere for mahmfic A moment between the dwarf family after an orc attack.
New Year's Night, by Elleth for Scribe of Mirrormere On the plains of Northern Rhûn in the early Years of the Sun, a young woman of the Kinn-lai goes on a perilous journey to rescue her missing sister.
The Second Gamble by Keiliss for The Wavesinger Fate, Ulmo's goodwill, and a family history of stubborn determination bring Idril to a reunion she had never thought possible.
Power to Protect by Linaewen for TallulahRed Finduilas and Denethor explain a Mettarë custom to young Faramir.
The Frozen Lake by burning_night for aliensouldream A hobbit, lost alone in the woods, comes upon a stranger.
A Gift for his Brother - for Linaewen - by Larner What does one give to one's beloved brother when Father has decided to sort of steal one's gift idea?
Love and Comfort by Silver Trails, for Indy1776 A storm is coming, and Maglor agrees to stay in Imladris.
"Víressë" by Dawn Felagund (for Keiliss) As Sauron's reach lengthens, Winter lingers overlong in Gondor. In the midst of cold, despair, and the slow march to war, Boromir kindles a forbidden love affair with an unknown errand-rider that creates intrigue and betrayal.
Tidings of Comfort and Joy for Kaylee Lupin by Amy Fortuna Olórin hears about Yule for the first time from Eärendil and gives him a gift which changes both their lives.
"An Unexpected Welcome" for mangacrack by Independence1776 They stared at their father and then at Maglor. Arwen eventually said, “Welcome to Imladris.”
The Mystery of the Missing Cake by The Wavesinger for Elleth The Midwinter cake is missing, and Idril, Aredhel, and Meleth go on a quest to find it.
"No one is to stay" for silver_trails by mangacrack A battlefield is usually not the right place for a deep and meaningful conversation.
Deep Waters for Starbrow by Talullah Red Elrond catches a very big fish… and says a very big word.
"How Does Your Garden Grow" for Dreamflower by Shirebound How did the Gamgees come to live in Number 3, Bagshot Row?
How Yule Came to Gondor for burning_night by Dreamflower When Sir Meriadoc Brandybuck and Sir Peregrin Took took their retirement in the King's City, they shook things up a bit.
A Great Smials Yuletide by Kaylee Arafinwiel (for Larner). Gandalf finds himself spending Yule in the Great Smials as Gerontius's guest, and is ambushed by a number of the Old Took's grandchildren demanding stories and other entertainment.

I hope you will check out the stories, and let the authors know how you liked them!
Collapse